Do you work in the press or media?

The information on this page is intended for journalists, press and media. Click YES to get to the newsroom. If you click NO you will come back to Mynewsdesk.com.

NNIT’s new CEO is all in

Pär Fors was on sabbatical, contemplating his next executive challenge when he was approached by NNIT’s Board of Directors. As talks progressed, it became clear that NNIT fit the bill: a CEO role within the tech industry, in a company with a clear and ambitious strategy for international expansion, but slightly different to other players due to its focus on life science.

After more than 15 years working in executive roles at CGI and Logica, including six years as President for CGI Sweden/Scandinavia, Pär Fors was ready for something new, possibly even involving a move to a new country. So, when he was offered the position of CEO of NNIT, he did not hesitate:

“Since I left my previous [chief executive] role a year ago, I’ve had more time to think about my future. I quickly knew I wanted a new operational role in the tech industry, because it’s what I am passionate about. And with reflection, I also knew that I wanted to do something different. So, when I learned more about the opportunity at NNIT, I felt like it ticked all the boxes… The focus on life sciences and the clear strategy to grow the company internationally combined with the prospect of moving to Denmark made it an easy and active choice. I’ve actually known and looked up to NNIT for many years. It’s a great company with great potential.”

The first 100 days is a listening period

Pär Fors was not hired to make major strategic changes, but rather to continue the strategic journey NNIT has been on since early 2020.

“Of course, when a new CEO enters, there’s an expectation that something new is coming, but in the beginning I want to listen. I am going to meet with key stakeholders internally and externally, and really listen to what they have to say. I want to understand where they’re coming from – both the good and not so good experiences,” Pär Fors emphasizes and continues:

“At the same time, we have a business to run, I’m very focused on that; there will be no freeze period, it’s very much business as usual.”

During this first period, he is equally eager to meet with colleagues and customers and describes himself as a people person, heavily invested in and oriented towards both groups.

Leadership is fundamental for success

Pär Fors is very aware of his role as leader and spontaneously comments that one of his absolute favorite topics is leadership. He sees it as fundamental to success, and it is something he evaluates continuously and specifically with each role change to make sure he knows who he is as a leader and what has led his organization to success.

He highlights three elements as central to his leadership (and person): customer orientation, action orientation and visible leadership.

“I feel it’s very important to listen to and guide customers – and to demonstrate a strong focus on quality, because that’s where all sales begin. I also feel you must focus on action – on ensuring a sense of continuous improvement and reinvention, which includes making allowances for mistakes and making sure you learn from them. And finally, I feel you must be present and accessible – making it evident by appearance that the people you manage are important to you.

People are at the heart of it

“If you don’t have a sincere interest in people, you’re in the wrong job,” Pär Fors says matter-of-factly when weighing in on where his passion and interest lie. He’s interested in technology, absolutely, but his passion is people:

“We are a people-driven company, and managers must first and foremost love people, not technology,” which brings him to his next point: “[that] you have to play to people strengths when you build your organization:”

“I think it’s essential to make sure you place people in the right role, and I am very passionate about people development. I’ve made it a priority in my career to help accelerate other people’s careers by guiding and coaching them to success; supporting them in their roles or moving them into a new role better suited to their strengths.”

He sees the team as the guiding unit, making the point that every leader, not least himself, should surround him/herself with talented people who complement you. “Together is what makes us a success, he states.”

My focus has always been to deliver value

Pär Fors’ path to an executive career was not an obvious one. Actually, he started out in finance and then quickly discovered that it was more fun “to create the numbers than count them,” as he puts it. But he did not set out with a career plan or an aspiration to make it big:

“What I’ve done is always focus on creating value, and I believe that if that’s your focus, the opportunities will come. My career advice would be to focus on the present and maybe use 10% of your energy looking to the future, but I know some people do it the other way around. I don’t think that’s the right approach, he says.”

He is also very clear about his family being his number one priority: “I make it a point to be there for my wife and two children, taking an interest in their different activities and participating in their lives.” And that’s not going to change, Pär Fors is looking forward to starting this new chapter with his family who will be relocating to Copenhagen during the summer.

CEO of NNIT is a defining moment

Aside from meeting his wife and the arrival of his children, Pär Fors points to becoming CEO of NNIT and moving to Denmark as a defining moment for him:

“It’s a well-reflected decision, my previous roles came about on the run as part of a natural progression, whereas NNIT is an active choice. Having said that, my previous role was really good training for this job, and it was a big step up for me at the time. It has prepared me for this challenge, and I am ready and all in.” 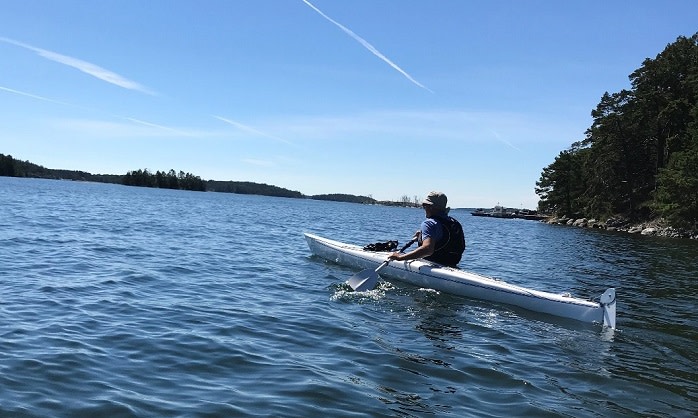 Pär Fors loves the water and enjoys both boating and kayaking - anything to do with water. He's enthused about living in Copenhagen, because it's surrounded by water and will provide a great playground.

On a personal note

Pär Fors holds an MSc in Business Administration and Economics from Linköping University, Sweden. He has spent almost his entire working life in the IT industry but began his career as a business controller and CFO before moving into operations in various directorial roles at WM Data and Logica.

In 2012, Logica became part of CGI where Pär first held the role of Managing Director, Application and Technology Services for CGI Sweden, then he became CEO of CGI Sweden and ultimately took office as CEO of CGI Scandinavia in 2019.

Pär Fors is 55 years old, married to Sofie, and the father of two children, Smilla (16) and Fabian (14). He describes himself as an outdoorsy type who loves skiing, boating and kayaking – anything to do with water. Recently, he discovered the merits of hiking as a great space for reflection as well as exercise and recommends it to everyone.

He is excited to explore Greater Copenhagen with his family, including the ‘joie de vivre’ he feels is characteristic of the Danes. In addition to partaking in the many sports and cultural activities of his new home country, he will also be spending time at his much loved summer house located in the archipelago of Stockholm, Sweden.

Today, NNIT’s Board of Directors have entered into an agreement with Pär Fors who will join NNIT as CEO as of June 14, 2021. Pär Fors will replace Per Kogut who has served as NNIT’s CEO since 2007.

In Q2, we saw continued strong growth within the Life Sciences International business, and we strengthened this business further with the addition of SL Controls. Once again, our Winning Solutions strategy gained traction, as it now constitutes 52% of NNIT’s revenue compared to 44% in the same period last year.

In Q3, we saw continued strong growth within the Life Sciences International business, and we strengthened this business further with the addition of SL Controls. Once again, our Winning Solutions strategy gained traction, as it now constitutes 54% of NNIT’s revenue compared to 46% in the same period last year.

Post COVID-19, NNIT is an even more Flexible Place to Work

NNIT has always been a flexible employer seeking to strike a great balance between company, team and individual needs. However, following the global pandemic and several lockdowns forcing us to work from home for long periods of time, it soon became evident that post-COVID times would mean a whole new take on the way we work.

We are all leaders of change. We all lead something or someone, and therefore we are all empowered to make a difference.